I was giggling with my colleagues at dinner after work about the sexy waiter serving us when my male colleague asked ‘hang on, aren’t you taken now?’ Taken?! I’m more likely to be kidnapped and taken away, than a man taking me to be his girlfriend!

I haven’t made this statement because I’m not worthy, but I feel that we are on the cusp of a big change in social norms. Divorce rates are high, ladies are having babies later on in life, its now legal to marry same sex partners, and online dating means that men have access to thousands of women and choices. Bumble online dating now has more information on potential matches showing everything from religion, desire for children and what kind of relationship they are looking for.

I should be a catch of the day. However, 42 year old men are posting under Relationship? ‘Don’t know yet’. Children? Undecided. If they don’t know at 42, then they are either not being honest or will probably never know what they want. 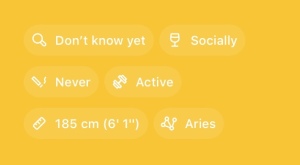 I don’t know yet

Wants relationship but not kids

And I have to share this catch of the day with you- gross! Seriously dude, you are trying to attract a mate, not a shark.

I thought Mr Suave was a catch of the day. So I was trying to put my best foot forward. But you know that saying about the best laid plans…. On my third date with Mr Suave I forgot my bank card. On my fourth date, I forgot my insulin! He handled it all like the gentleman he is. I was so embarrassed about the big reveal I made about diabetes though.

Usually I wait for the right moment to talk about having diabetes (never), or go in with a laissez-faire attitude (let people do and think as they please). I had kept it discreet until now and went out to dinner care free, skipped off to the toilets after eating to inject my insulin….. no insulin. I handled the next part cool as a cucumber and announced to him ‘sorry, I’ve forgotten some medication and will have to go home and get it.’ No problem to him and luckily we were five minutes from my house. What I did next was not cool.

He stayed in the hallway whilst I went through to the kitchen and got out a new insulin pen. It had been after a pint of beer so I pop back into the hallway and announce…

Well, this is my big secret! I’m diabetic!

You dick head, Little starfish. Luckily the rest of the date went well and was incident free. But it didn’t come up again which was a bit strange. He was also very quiet over text message for the next few days. Hmmmm, maybe he no longer thinks I’m a good catch. I ended up texting him..

Hey, diabetes isn’t my big secret. It just hasn’t come up before.

Mr Suave came over for Netflix and chill for our fifth date.

He said goodbye with ‘I don’t know when I’m going to see you again. I won’t be able to see you for two weeks.’

‘That’s fine’, I replied politely with a smile.

Feelings in need of expression.

You didn’t ask what I have on in the coming weeks, so maybe I don’t have time for you!

I’m not interesting enough to slot in on the weekend?

In fairness, he had told me earlier that he’ll be working late or long hours for his new job as they undertake on-the-job-training for the next two weeks.

Time will tell if I get thrown back into the ocean. And if he is the one for me. Part of me says if he isn’t interested enough to ask me more about diabetes, he isn’t that interested…..

One thought on “Catch of the day”